The Circle and Connections of Edward Raban

​Edward Raban arrived in St Andrews from Edinburgh in June 1620 and left before Whitsun 1622.  He was appointed as University College printer, operating from Kirke-Wynde under the sign of A.B.C.  In his brief time in St Andrews, he printed some 13 books, including four by Archibald Symson, two by Robert Baron, one by Andrew Melvill. He also printed two written in his own hand: resolution against drunkenness and The Pope’s New Years gifts.  The prospect of larger and more regular employment, encouraged by the influence of Dr Robert Baron, and promises of support by the universities and civic authorities induced him to move to Aberdeen.

Andro Hart was the principal printer and bookseller in Edinburgh at the beginning of the seventeenth century. He lived and worked in premises on the north side of the High Street, and imported books from the Continent on such a scale that books in Edinburgh were as “gude-chaip as they are sold in London”.  His 1610 edition of the Geneva Bible was the second to be printed in Scotland.  His work was renowned for its accuracy and for its distinctive bindings.  He used ‘A heart’ monogram.  His association with Raban in Edinburgh between 1616 and 1618 was hitherto unknown.
Baron graduated from the University of St Andrews in 1613. In 1619, he entered the ministry and took charge of the parish of Keith, succeeding Patrick Forbes (below). In October 1624 he was translated to Greyfriars in Aberdeen. On 21 December 1625, he was appointed the first Professor of Divinity at Marischal College. He opposed the National Covenant of 1638 through preaching and writings. He was one of the “Aberdeen Doctors”. 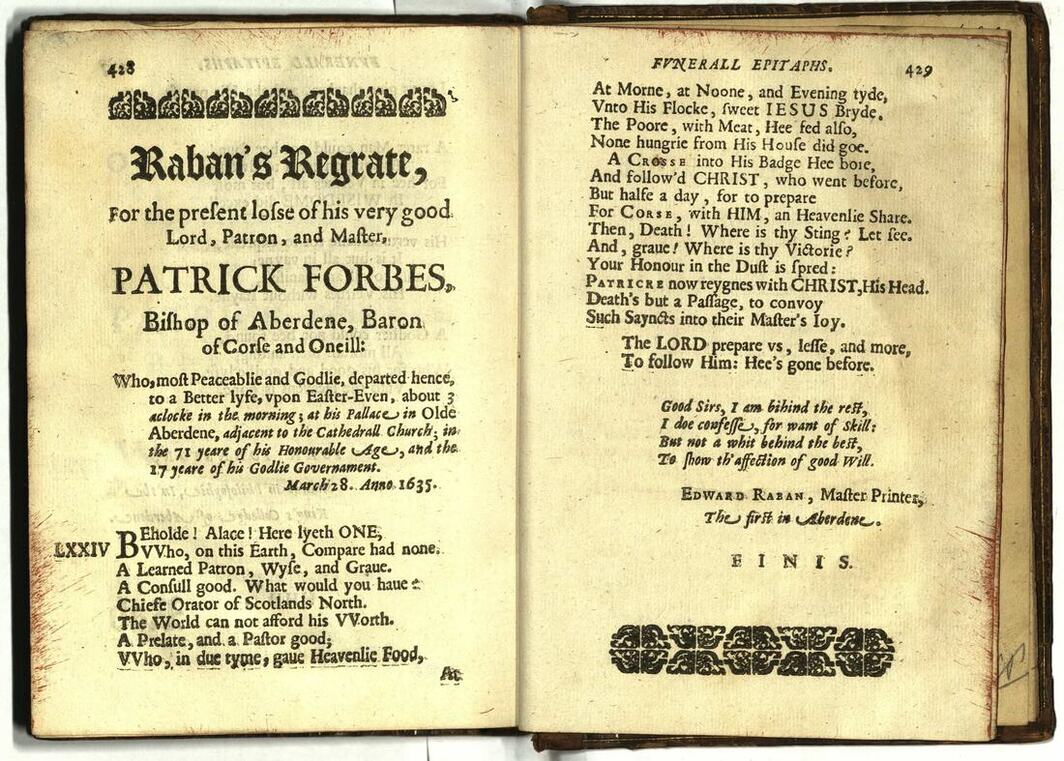 Sol is a source of mystery.  It has been suggested he had a hand in printing the Perth Assembly and that he is the ‘Master’ killed in a printed accident which Raban describes in his work ‘Resolutions against Drunkenes’. It has been said Sol’s pregnant widow fled with Raban to Scotland..  There are, however, many problems with these accounts particularly descriptions of Raban being Sol’s ‘apprentice’ as he was, by this time, already established in Edinburgh.