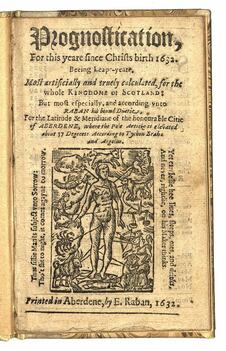 ALMANACS are publications setting out current information on diverse subjects, often arranged following the calendar.  Johannes Gutenberg produced the first printed almanac in Mainz in 1457.  There developed a flourishing trade in almanacs in England and, by the seventeenth century, they were bestsellers being surpassed only by the Bible.  The first Scottish example A Generall Prognostication for Ever was printed by Andro Hart in Edinburgh in 1619 adapting a work by Leonard Digges from 1555. Andro Hart was most likely responsible for other Scottish almanacs for 1618 to 1622.

Edward Raban printed A New Prognostication, for the yeare 1623. Serving the Kingdome of Scotland, and North Britaine for the bookseller David Melvill in Aberdeen. This was the first of an annual series that ran in various forms until 1955-56.  Thus, it was Edward Raban who laid the foundation upon which Aberdeen’s reputation as the standard for Scottish almanacs which lasted into the twentieth century, would be built. The initial format settled into a standard 16 pages in octavo at a price of a ‘plack” (4d Scots).

Octavo (from the Latin meaing ‘in eighth’) is a book or pamphlet made up of one or more full sheets of paper on which 16 pages of text were printed, which were then folded three times to produce eight leaves.
Raban proved to be innovative and imaginative as a printer despite his operation being relatively small. Raban printed music from early on but it was the introduction of Almanacs which was particularly noteworthy.  His Prognostications appeared each autumn for the coming year.  His first ‘Aberdeen Almanac’ was for 1623.

Edward Raban’s Almanacs were the most successful and highly-regarded in Scotland.  Under John Forbes (Younger), a later city printer, the Aberdeen Almanac became the most prestigious in Scotland, resulting in both jealousy and legal challenge from printers and booksellers in Edinburgh, as well as pirated editions in Glasgow.  Almanac printing in Aberdeen continued uninterrupted from the time of Edward Raban right up to the 1950s.

This edition, from 1632, features Raban’s Zodiac Man device which is a masterful depiction of the signs of the zodiac.  The title page also notes that although calculated for the whole of the Kingdome of Scotland, the almanac was ​

Most especially, and according vnto
RABAN, his bound duetie,
for the latitude and meridiatie of the honourable Citie
of Aberdene where the Pole Articke is elevate
about 57 degrees.

​Raban was succeeded by James Brown, (City Printer 1650–1662) who continued the tradition. Their legacy was inherited by John Forbes, father (1662-74) then his son and heirs (1674-1710). Under the Forbes family the Aberdeen Almanac thrived. In the 1680s, Forbes claimed to be producing 50,000 copies a year. It was taken on by James Nicol (1710-36).  He adopted a broadsheet format from 1717, before passing to James Chalmers I (1736-64) and James Chalmers II (1764-1810) followed by David Chalmers and Co (1810 - 1876). James Chalmers II bought the rights to the Aberdeen Almanac in 1771 and essentially re-launched it.
The three examples below are of Raban's first, second and third almanacs for 1623, 1624 and 1624 respectively.  The first one, 1623, was in all likelihood the second volume Raban printed in Aberdeen as they usually became available in late autumn for the year ahead.  They demonstrate the development of Raban's printing and his sense of being part of the city establishment.  The first volume included a standard device, but by the following year he had his own woodcut of the town arms.  The 1624 edition has the pristine arms but by the time the 1625 volume was printed the woodcut had cracked as can be observed below. 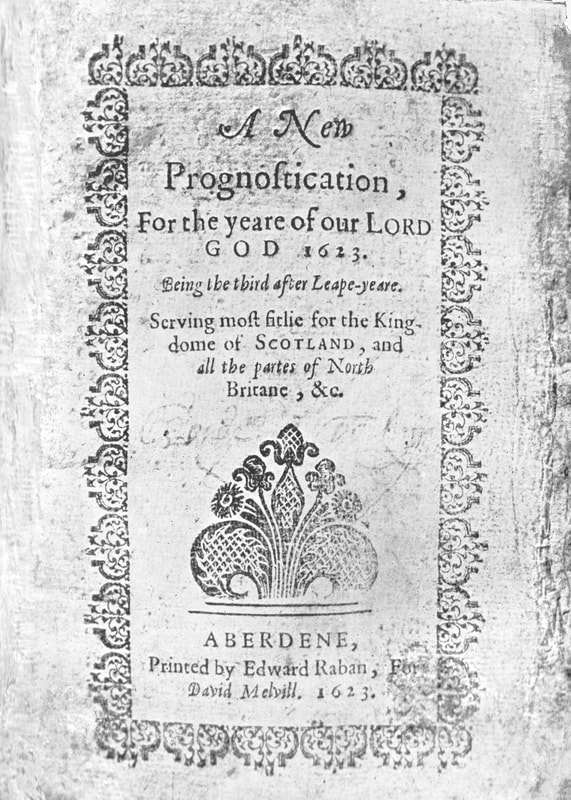 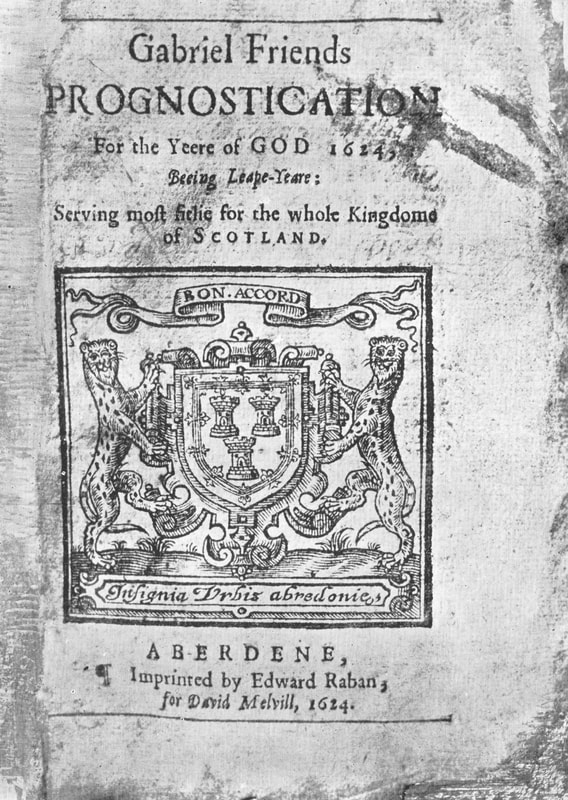 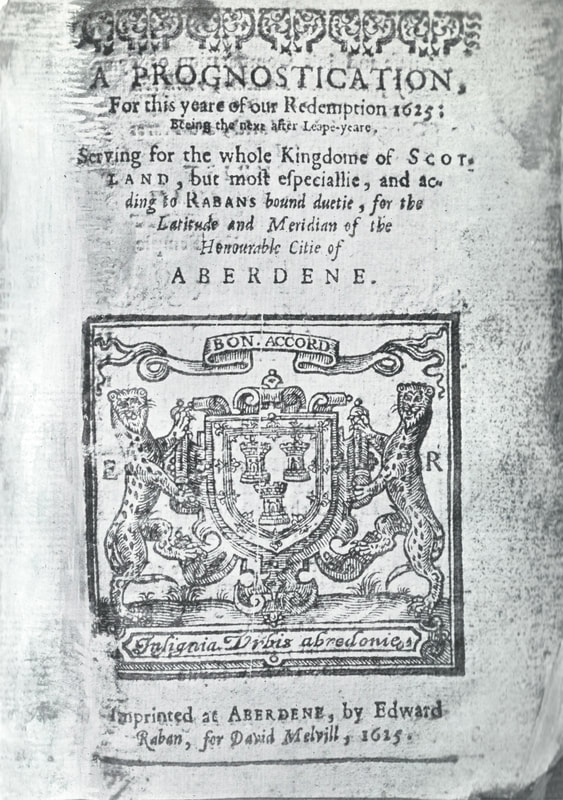