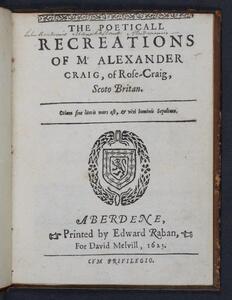 Alexander Craig of Rose Craig (ca. 1567-1627) was a native of Banff, where his father was a Burgess.  He was educated at St Andrews. At the accession of James VI to the English throne, Craig went to London hoping for preferment.  His work is fulsome in its praise of King James and Queen Anne and, in 1605, he was granted a pension of 600 merks by the King.

Craig’s previous volumes poetry were printed in London (T. White) 1604 and 1606, in Edinburgh (T. Finlayson) 1609.  He returned to live in Banff with maps showing Rose Craig overlooking the harbour.  He was a Commissioner and Bailie of the Burgh of Banff.

This volume was printed by Raban in 1623 for David Melvill, Bookseller.  Melvill was stationer and bookseller in the Broadgate and was Raban’s closest associate and, effectively, business partner. Melvill supported Raban financially and bequeathed his bookselling shop to him in 1643.

The use of the Royal Arms of Scotland on the title page of this volume is interesting.  It is not of the same quality as the ornaments and devices that Raban brought with him to Aberdeen and may well have been cut specially for this volume.

means leisure without literature is death and burial for a living man. ​​

Leisure without literature is death and burial for a living man. ​