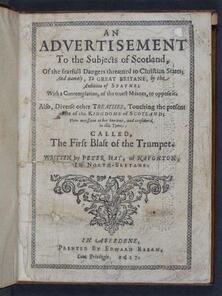 In a lengthy title, this volume, printed by Raban in 1627, describes itself as an Advertisement to the Subjects of Scotland of the fearfull Dangers threatned to Christian States, and also containing ‘diverſe other Treatises touching the preſent eſtate of the Kingdome of Scotland’

This book caused something of a stir when printed with the Archbishop of St Andrews forbidding mention of it at the Synod as it was taken to be offensive towards the Archbishop.  The volume was, however, dedicated to King Charles I who took a more lenient view of the work.
This volume is interesting because of the use of the device of the bear (commonly called Brewster’s Bear, associated with the Pilgrim Press in Leiden; although, in reality, a widely-used motif).  This is one of two versions Raban used (the other omitted the snakes on either side of the bear).