Raban was enticed to Aberdeen by a more attractive business proposition than pertained at St Andrews. Bishop Patrick Forbes and the soon to be Provost Sir Paul Menzies of Kinmundy had applied for and obtained a patent from James VI and I which formalised the role of the Town’s official printer, in 1621. It is also thought that Dr Robert Baron, who Raban knew from St Andrews, was instrumental in encouraging the move. Baron was soon to take up a position as the first Professor of Divinity at Marischal College and became one of the ‘Aberdeen Doctors’. 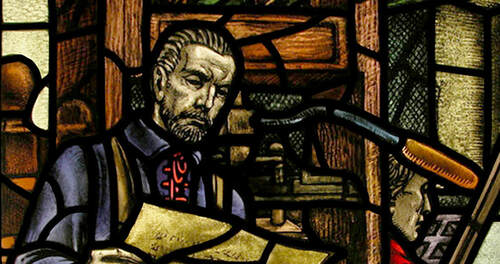 Raban set up his printing office and produced his first book in July (Theses), just a few short weeks after his arrival. 1622 was a very productive year with five produced in St Andrews before Whitsun and 8 in Aberdeen including a hornbook, Adagia, William Dunbar’s The merri Historie of the Thrie Friers of Bowicke, and, what would become the first Almanack, Prognostications for 1623.

The Town Council approved his appointment as official Printer for the Town Council and the two universities, Kings College and Marischal College in November 1622. The role came with a salary of 40 pounds Scots a year. The Town provided a building to house the family and the printing office with a rent equivalent to his salary. He supplemented his income from a charge on school children – 8d quarterly for pupils of the grammar, music, and English Schools, in lieu of the printing and supply of schoolbooks.  One of Raban’s roles was to print the labels that were pinned to the felons’ chest before they underwent punishment: